For a whole week thousands of players have been playing Pokemon Red/Blue at TwitchPlaysPokemon and you can be a part of the hilarity as well. Why hilarity? Well thats because TwitchPlaysPokemon is a channel on the game-streaming site Twitch that turns chat comments into controller inputs, parsing hundreds of thousands of ups, downs, and starts and translating them into in-game movements. The results rarely create coherent movements, but yet the participants have defeated half of the gym leaders in the game.

The sheer randomness is so much so that currently there is a chat battle between participants typing the word anarchy and participants typing the word democracy to control the game. Twitch saw that and placed a bar depicting the battle in the video stream. Basically, there are now two modes to Twitch Plays Pokemon, anarchy and democracy. Anarchy is the mode we’re all familiar with — all inputs in the chat are taken and immediately applied. Democracy on the other hand uses a “vote” system — the system takes the most popular input every few seconds and only applies that one. Players can vote to switch between modes at any moment. If Democracy mode gets voted in, Red’s movement is then collectively determined by the players. 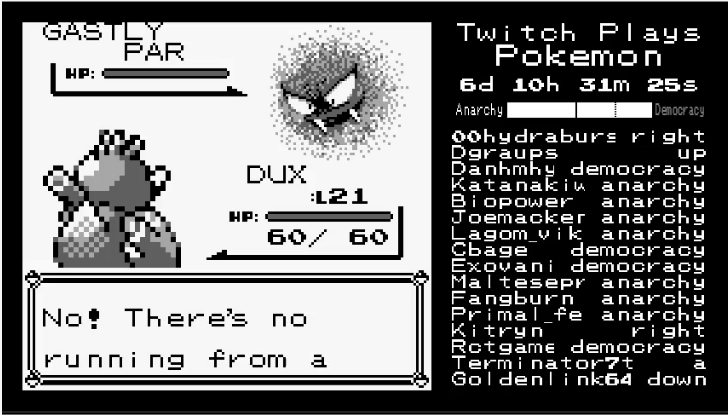 The channels creator said that TwitchPlaysPokemon will run indefinitely in the hopes that the crowd-sourced game will see its Elite Four defeated. Theres a huge lag between a chat message and the resultant input, so even if all 75,000 players are agreed on what needs to be done, a combination of lag and duplication may not help players achieve that goal anytime soon.

The stream has accrued 13 million views and the participant numbers rise drastically at peak hours, even reaching 80,000 simultaneous players at one point. In an article about TwitchPlaysPokemon Kotaku outlines how its possible that any progress is being made in the game with so many participants and technical difficulties, its worth a read if you are curious.

When he is not gorging himself on games and tech news, Adetunji creates designs and photography. Follow him on Twitter and Instagram to see more. @freeshype