At Mobile World Congress last night, Nokia announced a lineup of its Android phones. The phones are the Nokia X, Nokia X+ and Nokia XL. The three phones are manufactured by Nokia but run a forked Android version called Nokia X. Nokia has built its own services and interface on Googles Android and the OS has no ties to Google. It reminds us of the Android version on Amazons Kindle Fire range. 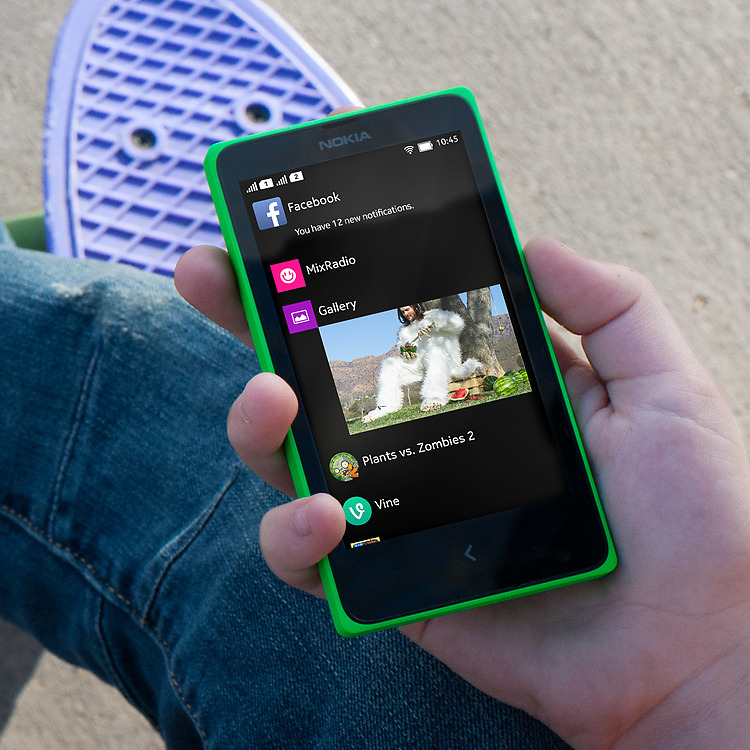 Pre-installed apps on the Nokia X+

The Nokia X+ packs a 4-inch IPS capacitive touchscreen display with a resolution of 800 x 600 pixels, giving it 233 pixels per inch. It is powered by a 1GHz dual-core Qualcomm Snapdragon processor and 768MB of RAM. Internal memory stands at 4GB and can be expanded up to 32GB via a MicroSD card. Its operating system is Nokia X 1.0

The Nokia X+ is a dual SIM phone and accepts Micro SIMs. The main camera on the X+ is 3 megapixels and captures pictures at a resolution of 2048 x 1536 pixels. It has a 4x zoom and lacks flash. The camera is capable of taking panorama pictures and has facial recognition. The Nokia X+ does not have a front camera.

Here are pictures of the Nokia X+

On the connectivity side of things the X+ has a microUSB 2.0 port, 3.5mm audio connector, bluetooth 3.0 with A2DP, WiFi and WAPI. It can connect to 3G HSDPA networks and download at speeds up to 7.2 Mbps.

The X+s 1500mAh battery lasts 4.5 hours on network browsing and 4.7 hours while browsing with WiFi. Music playback on the other hand will make the battery last 26 hours while video playback reduces its life time to 8.6 hours. This isnt impressive.

The Nokia XL  is the third phone in Nokias X series. It has a 5-inch IPS LCD display with a resolution of 800 x 480 pixels which gives a pixel density of 187ppi lower than the Nokia X+.

It is powered by a 1GHZ Qualcomm Snapdragon processor, 768MB of RAM and 4GB internal memory. Additional memory up to 32GB can be added via a microSD card. The Nokia XL is also a dual microSIM phone.

Below are pictures of the Nokia XL

The XL has a 2000 mAH battery that lasts 5.5 hours of browsing on cellular connections and 6 hours on WiFi.

Heres a quick video of the Nokia X, Nokia XL and Nokia X+ in action

Looking at the price points and features of Nokias X range, there are no wow features when compared to other operating systems. Nokias app store still requires developers to port apps to it(like BlackBerry 10). The price for Nokias phones is a little expensive compared to low-end phones from other Android manufacturers that target emerging markets.